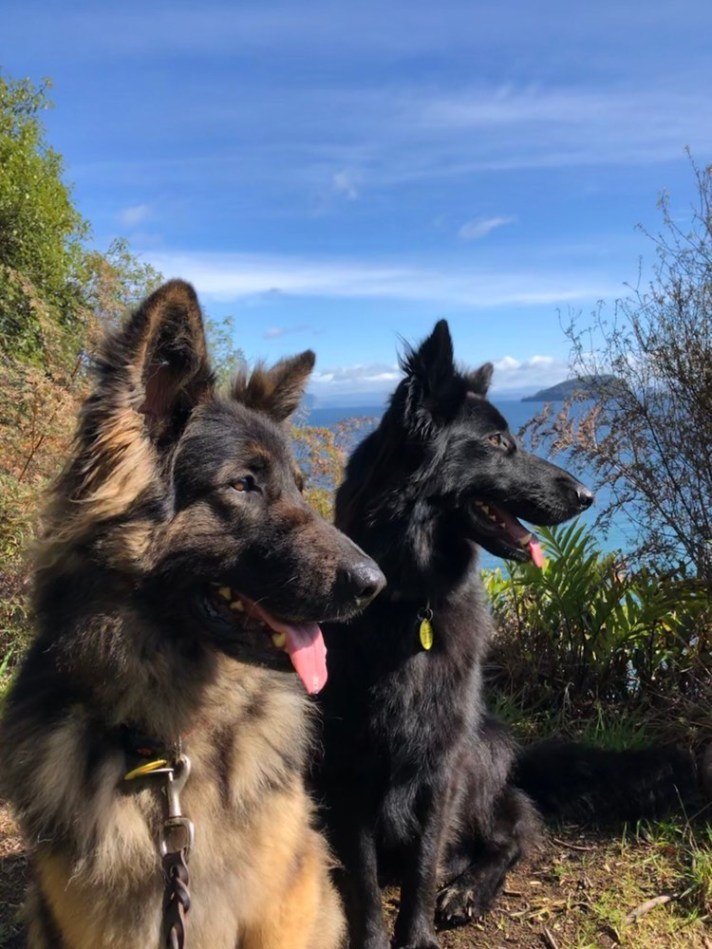 10 years ago, German Shepherd, Mahli, found her forever home with Naomi and Daniel. 6 years later, Rubi joined their family. They have all bettered the lives of one another, and continue to support each other every day.

In South Australia in 2011, Naomi and Daniel were looking for her a canine companion. They were searching all the local shelters and received a phone call from the Animal Welfare League. They had a pup that they felt might be a match – a 6-month-old stray German Shepherd. Immediately after the call, they jumped into their car and went to meet the new pup.

It was love at first sight for Naomi. The puppy, Shiera, could not keep still. She was very excited at the idea of meeting her new fur-ever humans. It was then, without a doubt, that she would join Naomi’s family, albeit with a new name – Mahli.

Mahli brought a new layer of happiness to Naomi and Daniel’s lives. Yet, there was still something missing. 6 years after adopting Mahli, they welcomed a new puppy into the family. After a long search for another German Shepherd puppy, they finally found one. She met a small, quiet puppy, which was decided to be a good fit for the very energetic Mahli. It wasn’t until they got home, they realised the new puppy, Rubi, was just as cheeky as her older adoptive sister.

Having both Mahli and Rubi in her life, Naomi has gained immense joy, as well as many challenges and lessons! Although the ensured the two dogs were properly trained and socialised, Naomi noticed Rubi was reactive around other dogs when with Mahli. For a period, they had to increase their training with Rubi to be less reactive. This was a big challenge. It got so stressful that they stopped taking Rubi and Mahli out to places such as parks and beaches, especially if other dogs were there. Naomi knew that, in order for her family to enjoy time out together, she had to increase their training. It was a lot of hard work, but now they are able to for walks in groups and pass other dogs without reacting, something Naomi did not think would ever happen.

Whenever Naomi feels down or stressed, Mahli and Rubi are her rocks. They bring her a lot of joy no matter what and encourage her to go out as much as often. Together, they go for walks and Naomi will take photos and can feel her stresses drifting away. They love exploring their world together.

Not only this, but Mahli played a very special role in Naomi and Daniel’s relationship. When Daniel proposed to Naomi, Mahli was right there with the engagement ring on her collar. This helped to ensure that the proposal was filled with love.

Going out for walks with both dogs allows Naomi to appreciate the simple things in life and to have a sense of peacefulness. She is grateful for her family having their health and being happy, as well as spending quality time together. In 2019, they embarked on a new adventure; moving to New Zealand.

Over the last 3 years, Naomi and Rubi have participated in charity events. Together, they have raised thousands of dollars for different conditions, such as bowel cancer, breast cancer, post-traumatic stress disorder (PTSD), and more. They educate people and spread awareness, as well as raising money to help those who may struggle with any of the aforementioned conditions. Naomi and Rubi are once again working to help support 2 important charities, Bowel Cancer Australia and the Breast Cancer Foundation NZ.

While they do a lot of work to help charities, they still enjoy travelling and going out on adventures. Whenever Naomi and her family are on holiday, Mahli and Rubi often excitedly join them. Together, they have seen a lot of the North Island of New Zealand and a lot of South Australia. Having both the dogs just adds a whole new layer to the excitement and joy of visiting new places and scenery.

It is evident how much Mahli and Rubi mean to Naomi. They obviously mean the world to one another. Having her dogs has allowed Naomi to meet new people and she has even started a walking group for reactive dogs. Having Mahli and Rubi has brought so much love and joy into Naomi’s life. You can definitely see the care and love they all have for one another.