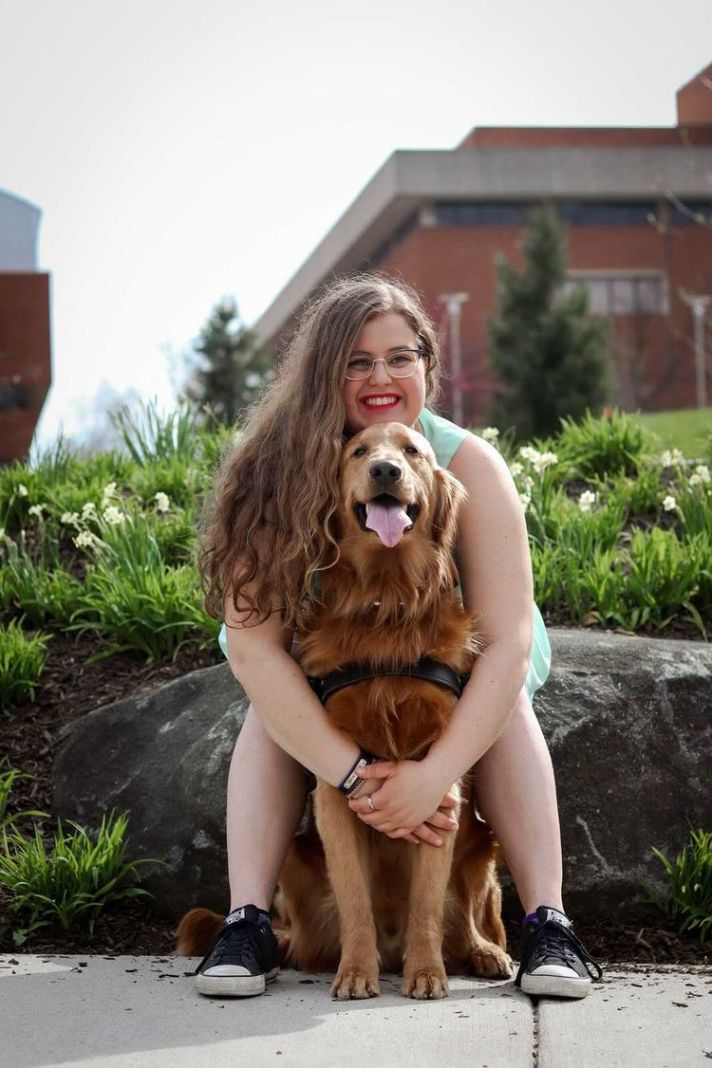 Over 4 years ago, Erica met her best friend and service dog, Chief.  In the time they’ve been together, their bond has only strengthened.

Within the first 6 months of Chief’s life, his owners passed away.  As his family had an older dog, they felt Chief would be best suited as a therapy dog for someone in need.  Chief flourished in this role.  Erica’s mother had heard of him and decided to give Chief a new home.  It was from that moment, Erica fell in love with her new fluffy companion.

Due to Erica having some health issues, Chief has been trained to be her medical alert and mobility dog.  He was trained by Erica.  Initially learning basic commands, Chief proved himself to be very smart and keen to learn.  Erica knew from this that Chief was her one in a million dog.

Having Chief has helped Erica in so many ways.  Their journey together started with Erica training Chief to be her service dog, but they have since become the best of friends.  Chief can now perform a wide variety of tasks to help his human companion.  He helps give Erica independence and confidence when out and about.  She feels safer with her companion by her side and has more freedom in her life.  The most valuable thing Chief does, however, isn’t a task at all.  He shows Erica that he is there for her, that she is loved unconditionally.

Not only has Chief helped Erica, but he has also had an impact on those within their community.  Before the Covid-19 lockdowns, Chief would often work as a therapy dog at local libraries as part of a program called ‘Reading with Rover’.  As part of this, children are able to read to Chief.  It helps them gain confidence in their reading skills as this is done in the presence of a loving and calm Golden Retriever.  There have been many children who have benefitted from this, but one, in particular, found it immensely helpful.  She had struggled to speak, but after some sessions with Chief, she was able to speak words and sentences.

As well as the ‘Reading with Rover’ program, Erica and Chief have helped out at Camp New Dawn.  This is where children who have experienced grief in their life are able to share what they have been through and learn healthy coping mechanisms.  Chief was one of the therapy dogs who attended this.  Having him there helped many of the children to feel more comfortable and safe to share their personal stories.  Even when discussing difficult topics, Chief was able to make everyone smile and laugh.

When Chief is off duty, Erica and he enjoy simply being together.  Chief loves dog sports, especially if it involves water!  He has also shown a liking towards weight pulling and is always keen to learn more tasks and tricks.  It has been a way for the two of them to bond.  They both enjoy doing this and it’s another way for them to spend time together.

Since having Chief, Erica’s life has become more full.  Chief has brought more laughter, happiness, positivity and confidence to Erica.  Before she graduated, during their exams, Erica would bring Chief onto the field for her peers to have some time to simply enjoy the company of a lovely doggo.

The bond between both Erica and Chief is truly a special one.  They both care so much for one another.  It is evident the love they share simply by how they look at one another.  Chief has helped Erica to have more confidence and independence, but also more happiness and laughter.