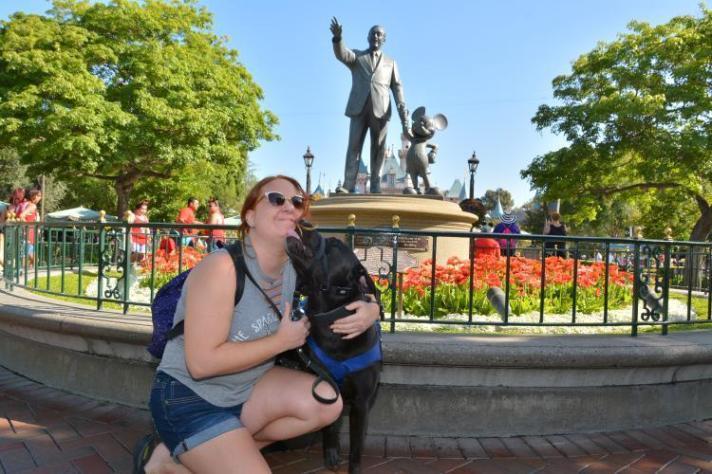 A few years ago, Loki walked into Roxanne’s life. From that moment, the two have formed a strong bond and have become the best of friends.

Roxanne has some health conditions. This means that some things can be a challenge for her. It was suggested that having a service dog would be helpful for her.  Following this, she immediately started looking.

Three years later, Roxanne found a litter of 12 puppies. She met with them when they were 6 weeks old. One puppy in particular watched her closely during the visit. It’s safe to say he adopted her that day, and she would be bringing her new puppy, Loki, home with her in the following weeks.

After a few months, Loki was training to become Roxanne’s service dog.  He flourished in this role and has helped his human immensely.  Now, he is fully-trained and helps Roxanne with a wide variety of tasks, including bringing her medications to her, waking her up from a nightmare, and making sure she is safe.

When they are out and about, Loki is always right by Roxanne’s side.  He helps Roxanne have freedom, independence, and confidence.  He has given her hope and inspires her each day.  Roxanne is able to be out within her community and know that she is safe with her loyal companion with her.

For both Roxanne and Loki, simply being together brings them happiness. No matter what, Loki can always brighten Roxanne’s day. One of their most special memories together is when they went to Disneyland. This is one of Roxanne’s favourite places to be, so sharing this with Loki meant a lot to them both.

Unfortunately, just over a year ago, Loki had to undergo a major surgery. He had torn his anterior cruciate ligaments (ACL) in both his hind legs. His mobility became impaired as a result and he was unable to be as active as he had been. It was a difficult time for both him and Roxanne but, just like it’s always been, they got through it together.

Following the surgery, it was a long recovery, but now Loki can run and play without feeling sore or fatigued. He is able to do what he enjoys and to aid his human once again.

It is evident the strong bond that Roxanne and Loki share. They have so much love for one another, which you can see from how they look at each other. Roxanne’s life has been immensely impacted thanks to Loki.