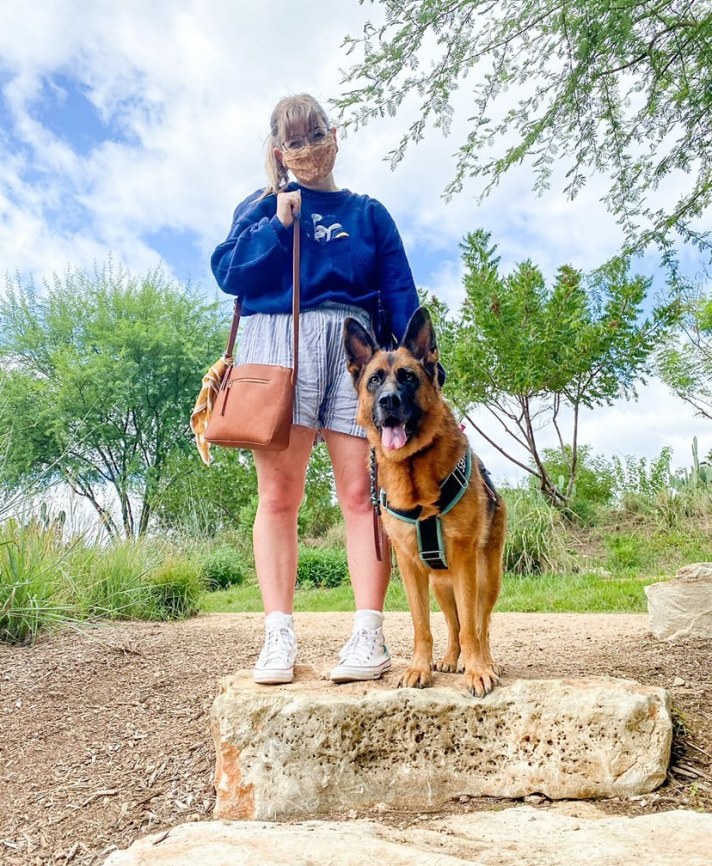 Emily struggles with a few different conditions. These can have a big impact on her daily life. She found it difficult to leave her house and to feel safe when going out into the community. Because of this, it was recommended to her that she may benefit from having a service dog.

Soon, Emily began searching for a dog who could help her navigate everyday life. She then met a two-year-old German Shepherd named Nike. It was then decided that Nike would become Emily’s service dog. Initially, however, Emily was unsure of how much her life would change with Nike.

It wasn’t long before Nike showed just how much she could help her human. Because of Nike, Emily was able to go out more. Things that might have been difficult, such as going to a doctor’s appointment, getting the groceries or going to a park, were made easier thanks to Nike. She helped make her surroundings more accessible for Emily.

In 2020, Emily began experiencing new symptoms. These were frightening for her, but thankfully Nike was right there for her. One day, Emily was sitting in on a lecture, with Nike asleep next to her. Suddenly, Nike woke up and started to press into Emily and began barking. Shortly after, Emily fainted and fell to the floor.

When she woke up, Nike was laying right across her. All of Emily peers and her professor were concerned and told her she had a seizure. After this happened a few more times, she was diagnosed with psychogenic non-epileptic seizures (PNES). Thanks to Nike’s constant care, Emily was kept safe during these episodes. This was something she hadn’t been trained for, it was her natural instinct.

Since receiving the diagnosis of PNES and with the help of Nike, Emily has been able to keep her driver’s license, continue with her studies and will even graduate at the end of the year. The impact Nike has had on her human is truly amazing.

Having Nike has changed Emily’s life for the better. Not only does she help Emily to be part of her community and to get out and about, but she has made the world much more accessible for her human. She brings joy to Emily’s life, as well as more confidence and independence. The impact she has had is immeasurable.

No matter what may be happening in Emily’s life, she knows that Nike will be right by her side. They enjoy each other’s company and simply spending time together.  Not only this, but they love to play and go on adventures together, too.

The bond between Emily and Nike is something truly special. Nike has changed Emily’s life and their bond will only continue to flourish. It is evident how much love they have for one another and how much happiness they bring to each other’s lives.