14 years ago, Helen adopted Fur. Since then, they, as well as Helen’s husband, Alessandro, have become a family and have all bettered each other’s lives.

In 2007, Helen was looking for her own furbaby. She had heard of a litter of moggy kittens and was on her way to adopt one. Once she arrived, a small grey tabby kitten poked his fluffy head out from the door. From that moment, it was definitely love at first sight for Helen. There was no doubt the kitten, Fur, had found his forever home.

During the 14 years Helen and Fur have had each other, they have had gone through a lot together – both good times and bad times. They have become the best of friends and helped one another through many challenges. Fur loves to follow Helen around the house and happily comes running whenever she calls him!

Four years ago, Helen, Alessandro and Fur travelled to Qatar. However, this didn’t go as smoothly as Helen had hoped! To help Fur keep calm during the flight, Helen gave him some loose catnip. Unfortunately, they were stopped before boarding as the drug scanner read it as cannabis! After a while, they were able to confirm it was catnip and Helen, Alessandro and Fur were able to just make it to their plane!

Both Helen and Fur love to play chase every day! He could happily play it all day. Each evening, however, they love to relax and snuggle together, and Fur loves a nice tummy rub. They just love being in each other’s company.

Not only has Fur had an impact on Helen and Alessandro, but also their community. In their neighbourhood in the UK, Fur is very popular. He happily follows Helen whenever she goes to check the mailbox, but often tries to make a few stops along the way – especially if he can smell food. One time, he even managed to sneak a roast chicken!

The impact that Fur has had on Helen has been huge. He has brought endless happiness, laughter and love into her life, as well as Alessandro’s. The bond they all share is truly special. 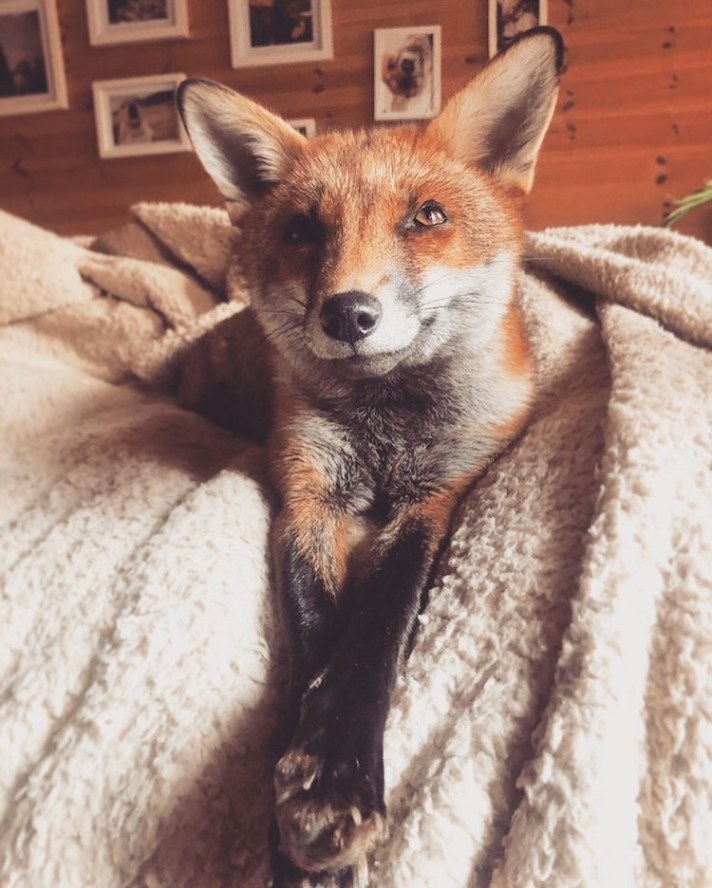 Just over a year ago, Pauline welcomed fox kit Marley into her home. Ever since, they’ve become best friends and Marley has flourished into a thriving adult.

Pauline has always been an animal lover. Even before Marley, she was known for rescuing animals who needed a bit of extra love and care. One day, Pauline was introduced to a tiny abandoned red fox kit who was obviously very unwell and needed urgent vet care. Unfortunately, all the rescues in the area were unavailable due to covid, so she decided to take the fox in and take her to be treated. Shortly after, she adopted the kit and named her Marley.

Due to ongoing health issues, Marley could not have been released back into the wild. Generally, foxes should not be kept as pets. They can be a lot of work and are naturally wild animals. However, due to Marley’s health challenges and being abandoned at such a young age, she wouldn’t have survived on her own in the wild. Pauline wanted to give Marley the best chance of living a happy and healthy life.

In return, Marley has also helped Pauline immensely. They’ve both enjoyed going on adventures together. Marley has opened so many new doors for her human, from exploring new places to meeting new people.

Having Marley has inspired Pauline to become an advocate for animal welfare, especially foxes. Unfortunately, in the UK fox hunting is still something that is participated in. Pauline advocates against this and wants everyone to know just how beautiful foxes are. They have emotions, they form bonds, and more, as anyone with an animal will surely agree! She is a big supporter of Keep the Ban and Save A Fox, both organisations dedicated to protecting and helping foxes in the UK.

Together, they educate their community. From sharing photos to having people meet Marley for a cuddle, it shows what foxes are really like. Many have fallen in love with Marley due to her bubbly and sweet nature.

It’s safe to say that Marley has definitely found her forever home. She’s surrounded by love, both from her human family and Pauline’s five dogs. Pauline always ensures that Marley feels comfortable and safe. They all protect her and show her kindness.

Both Pauline and Marley have a very special bond. Not only this, but they are making a difference in the lives of many animals and people.

It’s obvious how much Pauline and Marley care for one another. Their lives have both improved for the better simply because of one another.